Was Boy Murdered or Did He Fall?

In 1854 a Dublin man claimed to have dreamt of his son being murdered at the time he actually died. However there was insufficient evidence to convict anybody in relation to the boy's death, which the judge suggested could have been an accident.

On Tuesday 14th March that year the steamer Trafalgar, owned by the City of Dublin Steam Packet Company, was lying in the Sandon graving dock. At around 11.30pm two policemen on duty heard a loud noise similar to a door slamming and boarded the 190 foot long vessel to investigate. Lying between the wheels of a gun carriage they found the body of fourteen year old William Hare, an assistant ship steward.

Hare's body was still warm and there was a large amount of blood near the head. Just a few yards away a cabin door was open and inside the police found two crew members still asleep and the ship's acting steward John Jordan in a half awake state. Jordan was told of what had happened and taken to the murder scene, where he said 'Poor Bill, poor bill' and then returned to his cabin. 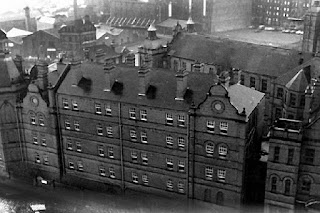 The body was taken to the Northern Hospital and Jordan kept in custody due to his suspicious actions. A search of his bag recovered a wet shirt, which would be used as evidence against him at the inquest.

An inquest took place on 16th March, attended by Hare's father, who had travelled from Dublin after receiving a telegraphic message. He was the regular steward on the ship and he stunned those present by stating that on the Tuesday night the whole of the circumstances attending to the death were visible to him in a dream. It was established that the last confirmed sighting of Hare was at 930pm when he had been ashore with the ship's fireman, having earlier cooked bacon on board.

The first evidence regarding Jordan came from the two sleeping crew members who said they had last seen him at 730pm. A plumber named Thomas Ford stated that he had seen Jordan wearing the same shirt on the Tuesday that was later found in his bag. This led the police to suppose that he had washed stains from it. When questioned by the coroner about this, Jordan replied that he had been 'relaxed in his bowels' on the Monday and hadn't wanted his washerwoman to clean the shirt. This contradicted with Ford's evidence though about him having been seen wearing it on the Tuesday.

The surgeon who carried out the postmortem said that death had been the result of a fractured skull and lacerations to the brain. The injuries could have been caused by blows to the head with a blunt instrument or a series of falls. Although the evidence presented showed that Hare had met a violent death and that Jordan had been drinking excessively, nobody could state that they had seen him and Hare together. There was also no hint of any malice towards Hare from Jordan, who maintained that he 'never lifted one finger to the deceased.'

After 45 minutes deliberation the coroner's jury returned a verdict of wilful murder and Jordan was committed to the assizes for trial. He was then taken to Kirkdale gaol to await his trial, which took place just two weeks later on 31st March before Mr Justice Cresswell.

After the prosecution had presented their evidence, which was the same as had been heard before the coroner, the judge interrupted the trial. He said that for the prisoner to be convicted of wilful murder there should be 'direct evidence or a chain of circumstances as could not be reconciled by any other conclusion than the guilt of the party against whom the charge was made.'

Justice Cresswell then went on to sum up the facts; that there was no weapon, nobody had seen Jordan near his supposed victim, there was no blood anywhere else apart from near the body and that no screams were heard. The judge also suggested that Hare could have died as a result of falling from climbing the rigging, although accepted that it was inexplicable as to why he would have done that. Finally, he stated that it was unsafe to convict when a life was at stake, he ordered the jury to acquit Jordan.