What was described as a silly argument between between friends led to one of the dying from their injuries after a fight. When the case went to trial however, leniency was shown by the judge. 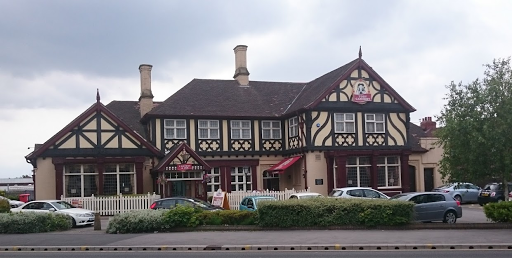 On 9th April 1957, Brian Connolly and Philip McAndrew, both aged 22, went for a few drinks at the Queens Hotel in Stoneycroft with a man named, John Neilson. Around closing time they began arguing about the merits of another friend, and crossed Queens Drive to settle this by fighting on some wasteland.

Neilson was given their coats to mind, then Connolly stuck McAndrew on the chin with his fist and he fell down instantly. He died before an ambulance called by Connolly arrived. Connolly was taken to Old Swan bridewell and questioned. He admitted throwing one punch and was charged with manslaughter. When he appeared at the magistrates court in the morning, he was remanded on bail for a surety of £25.

Philip McAndrew's death was the second tragedy involving the children of the family from Crofton Crescent. In 1937 his brother Donald died aged 6 when he fell from a drainpipe whilst climbing to retrieve a football.

On 30th May a committal hearing took place, where the cause of death was confirmed as aphysxia due to swallowing vomit.  Neilson confirmed that McAndrew went down on his back after being punched just once and hadnt struck any blows. Rex Makin, who was defending Connolly, read out a statement which said "We had about five pints of beer each and Phil and I started arguing about another mate of ours. Due to the drink we had this silly argument continued and Phil issued a challenge to me. I feel really sorry about the whole thing, it should never have happened." Makin contended that there was no case to answer, but the magistrate felt that it should proceed to trial.

Connolly, a lathe turner who lived in St Oswald's Crescent, appeared at St George's Hall on 30th November. His defence counsel maintained that this had been a 'friendly fight' and that the two men had been laughing and joking as they walked over the the field. Connolly was found guilty but spared jail by Mr Justice Lynskey, who instead placed him on probation for three years.

Posted by Steven Horton at 19:13 No comments:

When a three year old girl died as a result of being hit by a brick thrown by a nine year old boy, he avoided punishment. 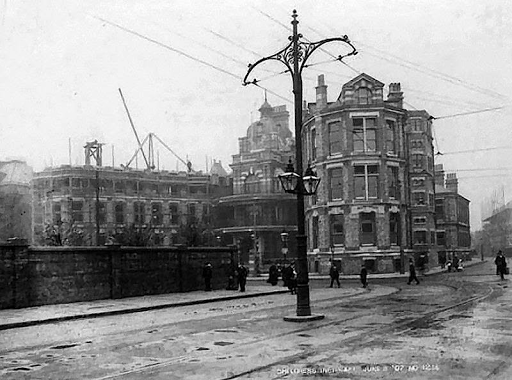 At around 6pm on the evening of 6th June 1912, a number of children were playing in Wilfer Street, off Earle Road in Edge Hill. One of them, nine year old John Dean, struck a girl called Fulwood and also through a small piece of brick through a glass window on her family's front door. The girl's elder sister came out of the house and gave John a thrashing, but as she was returning to her house he threw a brick in her direction. This fell short and hit the head of three year old Alberta Maher, who was sat on her own doorstep.

Alberta fell down injured and was taken to the children's infirmary at Myrtle Street. An operation was performed but she succumbed to the injury three weeks later. The daughter of a tram driver, she was buried in a public grave at West Derby Cemetery.

An inquest was held before the Coroner, Mr Sampson, with the Daily Post reporting that 'several children of tender years were there to give evidence.' John was sat apart next to his parents and described as 'diminutive, of rather ragged appearance.'

After hearing the evidence, the Coroner told his jury that if John understood the danger of what he as doing then a verdict of manslaughter should be returned. After a lengthy deliberation the jury concluded that 'the deceased died as a result of the injuries from the stone thrown by the lad, who was not of sufficient understanding to be accountable for his actions.'

The Coroner told all those who had given evidence to keep their play free of quarrels and that there was too much stone throwing going on, especially by young boys. He also told John that had the police taken action, then he would have been sent to a reformatory.

Posted by Steven Horton at 21:38 No comments: 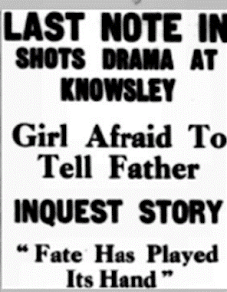 A man shot his lover who was less than half his age before turning the gun on himself, after he found out she had started seeing someone else.

On the morning of 29th July 1948 a farm labourer saw what he thought was a couple sleeping in a field off Stockbridge Lane, Huyton. He informed the police but when a constable went to investigate, he uncovered a tragic event. The man and young woman were both dead with gunshot wounds, and a revolver was still in the man's hand.

The two people were identified as sixteen year old Margaret Whiteside, who lived with her family in nearby Winstone Road (pictured), and Stephen Coady, a thirty five year old man from Netley Street, Kirkdale.

An inquest took place the following day overseen by Mr Bolton, the Coroner for South West Lancashire. Evidence was heard that Margaret and Stephen had been seeing each other for about a year. They had met at the home of Stephen's sister in Peasefield Road, a short distance from Margaret's home.

In early June, Margaret had started seeing Bob Bamford, who was closer to her age. She decided to end the relationship with Stephen, who responded that he had nothing left to live for. On 28th July, she arranged to meet Stephen in Stockbridge Lane to hand some letters back to him, then failed to return to Bob at 10.30pm. 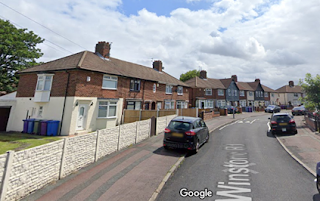 Letters which had been found in Stephen's pockets were read out by the Coroner. They were addressed to Margaret's parents, who had no idea about the relationship and said "I am sorry to this day that I was ever born to meet your daughter. I love her far too much to face life without her, you may curse me for the rest of your days but I only hope I roast in Hell for the injustice I have done to you."

The jury returned a verdict that Stephen had murdered Margaret and then committed suicide while the balance of mind was disturbed.

Posted by Steven Horton at 20:47 No comments: