Unsolved Murder of a Boy in Anfield Cemetery

The killing of a teenage boy whose body was found in Anfield Cemetery has never been solved. 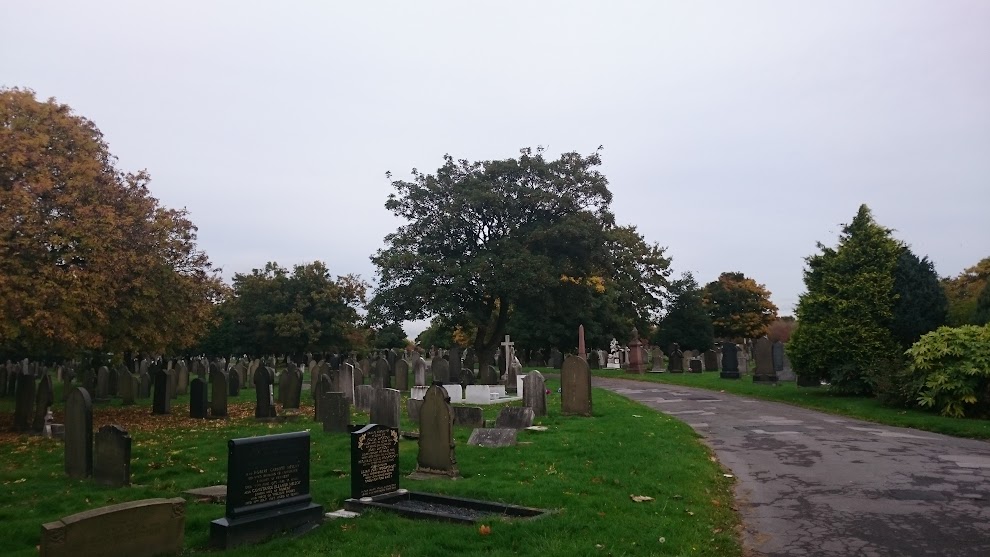 Widowed mother Margaret Howell of Bidston View in Walton Road last saw her thirteen year old son Edward alive when he left home at 6.30am on Friday 11th June 1875. He was on his way to work as an apprentice stonemason for Mrs Stirling's monumental works at Anfield.

Edward did return home for his dinner whilst his mother was out at work, but on going back out looking for bird nests he never returned. His disappearance was reported to the police and posters were distributed asking for information about his whereabouts.

At 10.55am on Saturday 19th June a body was found in some trees at Anfield Cemetery by four dock labourers. It was removed to the deadhouse there. Margaret identified the body as that of her son, who appeared to have strangulation marks around his neck.

At the inquest on 22nd June Margaret was asked by The Coroner Mr Driffield about her son's passion for birdnesting. She explained how he had promised her he would only find one more nest then would stop. She also did not believe he would have gone looking for nests in the cemetery, but more likely met his death whilst trying to escape a beating from someone on whose land he had trespassed. She described him as 'generally a healthy boy'. His uncle John Garrity, who also worked as a mason at Mrs Stirling's yard, described him as 'well and hearty and never in strange mind.'

Dr Matthew Hill of Bootle, who carried out the postmortem, said that he believed death was the result of strangulation with a cord or possibly a neck tie. Crucially, he suggested that the low state of decomposition indicated that Edward had not been killed at the cemetery, but more likely elsewhere before being carried and dumped there.  The cemetery's gardener George Priestly explained that he had twice been where the body was found that morning and not seen it, while the bushes and shrubs appeared to have been placed over it deliberately for concealment. This was confirmed by a police constable.

Two brickmakers who worked in Cherry Lane told how they had been working at 6.45pm on the day Edward disappeared and had heard two screams from the direction of the cemetery. They also had passed through the cemetery the following Tuesday about fifteen yards from where the body was found, and noticed a cap that was later identified as being Edward's. They both said that they had heard one local resident was extremely strict with anybody who went on their land.

After the jury returned a verdict of 'wilful murder against a person or persons unknown' police made exhaustive enquiries but found no real clues to the killers identity. This led to the Home Secretary authorising a reward of £100 on 17th July to anyone who could provide information leading to a conviction. Such was the lack of information that he also granted Her Majesty's Pardon to any accomplice who would give evidence against the killer. Despite this, nobody came forward and the killing of Edward Howell remains unsolved.

Posted by Steven Horton at 15:01 No comments:

Killed By A Bale of Cotton

When a man died after being hit by a bale of cotton that was thrown down the stairs, two men were charged with manslaughter.

At 8am on 26th December 1861 William Gordon, a fifty year old letter carrier for the General Post Office, was delivering mail to the offices of Joynson & Maitland in Druid's Court, Dale Street. 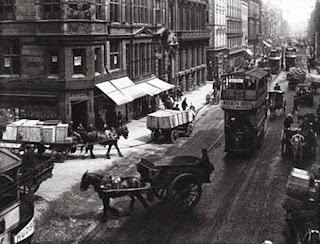 As he was climbing some stairs to the first floor he struck by a bale of cotton and knocked backwards. This bale was being taken to a waiting cart by two employees of cotton merchant Pierre Mussabini who occupied the top floor of the building.

Gordon was taken by cab to the Royal Infirmary where he made a statement to police, saying that he had seen bales of cotton thrown about before and that nobody was in charge of it on this occasion. The two employees, Archibald Cunningham and Dennis Mulheren, were then questioned. They both claimed that Mulheren had been in front of the bale and slipped, causing it to topple over and crush Gordon.

At 10am the following day Gordon passed away at his home in Guilford Street, off Everton Road. A surgeon put his death down to fracture of the spine at the neck caused by external violence.  He was buried two days later at St James Cemetery, with about one hundred post office employees attending his funeral.

At the inquest before the Coroner Mr P F Curry on 30th December, a verdict of manslaughter by gross negligence was returned, leading to Cunningham and Mulheren being committed for trial. Gordon had worked as a letter carrier for the Dale Street district for 28 years and all bars and hotels in the street agreed to take donations that could be passed to his widow.

On 26th March 1862 Cunningham and Mulheren, described as 'respectable looking' in Liverpool Mercury, appeared at the Spring Assizes. Their defence was that they were bringing the bale of cotton down the stairs in the usual manner and on slipping, Mulheren had jumped out of the way not knowing Gordon was about to go onto the stairs. This was accepted by the jury and both werefound not guilty and discharged from the dock.

Posted by Steven Horton at 12:03 No comments:

Email ThisBlogThis!Share to TwitterShare to FacebookShare to Pinterest
Labels: 1861, L2, not guilty

There was a tragedy in 1888 when a fifteen year old girl was accidentally shot dead by her brother, who did not realise the gun was loaded. 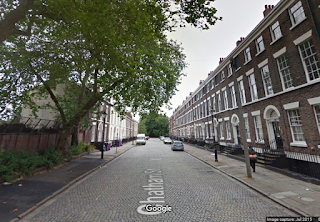 On the afternoon of Sunday 11th November that year at 62 Chatham Street, Catherine Lang asked her widowed mother Elizabeth for a book called Good Thoughts By Great Minds. She was told to go upstairs and see her brother Hugh as he had it. A few moments later Elizabeth heard the sound of a gunshot and on going to a bedroom to investigate, was pushed out the way by Hugh who was in a distressed state.

Catherine was lying on the bed with a wound to the head, while a revolver was on the floor. A doctor was called but life was pronounced extinct and he stated that death had been instant. Hugh, who was a junior clerk and in a state of total shock, accompanied his grandfather John Dickson to the detective office.

Hugh made a statement which read "My sister wanted a book which was in the room where my cousin sleeps. I went to get the book, she followed me. I was on my knees getting the book when I saw her sitting on the bed. I saw the revolver which I had in the box and pointed it at her in a playful manner. She said 'Oh, I am not frightened of it.' I must have pressed the trigger too tightly and it went off. I did not know it was loaded, although I must have loaded it myself. The revolver was my fathers."

John Lang, a commercial traveller, had died eleven years previously and detectives established that it had belonged to him. Hugh was detained at the detective office pending an inquest, which was arranged for two days later before Clarke Aspinall at the Coroner's Court.

Mr Aspinall told the jury it was one of the most painful cases he had ever dealt with and it was for them to decide if the firing was accidental or not. They returned a verdict of accidental death, with a comment that firearms should not be allowed to come into the control of youths. The Coroner told Hugh that he was free to go and that it was clear he and his sister were greatly attached and he had been greatly affected by the incident.

Posted by Steven Horton at 21:01 No comments: