A man from Liverpool was battered to death during riots in Singapore just four days after he had got married. 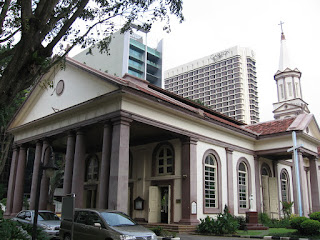 On 9th December 1950 Timothy Crowley, who was employed as a clerk by the Air Ministry, married Josephine Maher at the Cathedral of the Good Shepherd in Singapore, which was then a Crown Colony. Two days later he was battered in the Katong area by Muslim rioters. They were protesting after a court had ordered that a girl adopted by Muslims during the 2nd World War be returned to her biological parents who were Christians.

Josephine was rescued by a policeman and taken to a police station for shelter but Timothy's body was found in a drain the following day. His best man was also killed. Timothy was just 29 years old and the son of a family from Kingsway in Waterloo, while Josephine's parents lived in Aigburth Hall Avenue. She worked as a receptionist in a doctors surgery in Aigburth Road and had flown out to Singapore, where her fiance had been stationed for two years, at the end of November

Timothy was buried at the Kranji Military Cemetery in Singapore. His headstone has the inscription 'Our beloved son, killed in  the Singapore riots'. In total the riots claimed the lives of eighteen people and injured over 200. Five people were arrested and sentenced to death, but their sentences were later commuted to life imprisonment.

Posted by Steven Horton at 23:09 No comments:

Murder and Suicide in Cheapside

A man who killed his wife then committed suicide himself was not given a proper burial due to the traditions of the time and he was instead interred underneath a crossroads.

On 15th February 1815 around 6pm a passer by in Cheapside came across another man named Thomas Cosgrove, who was wearing nothing but a nightcap.  Cosgrove begged to be taken in, saying that he had strangled his wife and cut his own throat. Two other men were brought to the scene and they found Cosgrove's wife lying on a bed covered in blood and quite dead. A constable was sent for and Cosgrove showed no resistance as he was taken into custody.

Cosgrove's throat was sewn up and he was kept in the Bridewell. An inquest into his wife's death returned a verdict of wilful murder, having heard they lived on bad terms and she had 'frequently expressed her fear of being beaten'.

On 28th February Cosgrove died and an inquest into his death returned a verdict of Felo De Se, literally 'felon of himself'. In those days those who committed suicide were given a shameful burial and Cosgrove was buried with a stake through his body at the crossroads of Vauxhall Road, Great Crosshall Street, Hatton Garden and Tithebarn Street. The idea of this was that by being buried in the centre of a cross, he would never rise again to commit such deeds. It was not until the Burial of Suicide Act of 1823 that this practice was outlawed.

Nearly forty years later, in 1854, workmen were excavating trenches for sewer pipes here when a rotting corpse was discovered. Older locals recalled what had happened between Cosgrove and his wife but rather than re-inter his remains in the Necropolis, they were simply covered over, where they continue to lie under the tarmac to this day.
Posted by Steven Horton at 22:08 No comments: