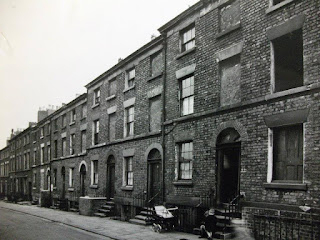 When a widow died after being kicked by a fellow lodging house tenant, doubts over her health led to him being acquitted at his trial.

On 12th August 1917 at a lodging house in Field Street, Everton, 41 year old widow Mary Cockford was talking to her sister whilst stood on the steps. Labourer Edward Kennedy returned home about 930pm and shouted at Mary to stop blocking the entrance.

When Mary's sister tried to calm him down, Kennedy kicked Mary in the breast and stomach. As Mary then stood up and tried to straighten her hair, Kennedy seized it and pulled her down. She landed heavily and became unconscious, dying soon afterwards.

Kennedy, also aged 41, was arrested on suspicion of murder and held in custody until the inquest which took place three days later. Evidence was heard that Kennedy had taken a dislike to Mary as she used to allow his wife to stay in her room when they had quarrelled. Medical evidence suggested that Mary had a weak heart and stomach condition, but they would not have led to death unless exposed to excitement or violence. This led to the coroners' jury returning a verdict of manslaughter.

At the Crown Court trial however, medical experts were not as certain about the cause of death. under cross examination they admitted that Kennedy's blows only 'might' have led to the heart failure. This led to him being acquitted and freed from the dock.
Posted by Steven Horton at 22:38 No comments:

Email ThisBlogThis!Share to TwitterShare to FacebookShare to Pinterest
Labels: 1917, Everton, not guilty

A Fatal Night Out

A woman's decision to go out with her friend while her boyfriend worked a nightshift proved fatal when she was battered to death by him the following day.

In 1968 James Tierney, a 41 year old hotel porter who was separated from his wife, began cohabiting with twenty year old Joan Edwards at a flat in 22 Princes road, Toxteth.

On the evening of 22nd July that year Joan went out with another female who lived in the property, calling Tierney at his work to say that she would be out all night. The two women then met a couple of Arab sailors in a public house and went on to a club, before accompanying the two men their ship.

The following morning Joan went shopping and then to the cinema, too scared to go home to face Tierney. He located her in a pub that afternoon, dragging her into a van being driven by his friend and battering her. He continued the assault back at the flat, eventually inviting a friend to see what he'd done and calling an ambulance shortly after midnight.

Joan was pronounced dead on arrival at hospital, the cause of death being found to be cerebral hemorrhage due to repeated blows to the head. When interviewed by detectives, Tierney said he was very fond of Joan and hadn't meant to kill her, but admitted beating her with his fists and then a stick from a broken maiden. He went on to say 'I could not stop myself when I started, because I did not like the way she had carried on'.

At Liverpool Crown Court on 28th October Tierney was defended by leading Q.C Rose Heilbron, whose offer of a guilty plea to manslaughter was accepted by the prosecution. In mitigation, she told the court 'She had gone off and stayed away overnight and he had made a long search before he found her. None of this condones what he has done, but it is only fair to put forward the reason for the provocation that led to this assault. He had lost his self control and was in a frenzy because she had gone off with another man'

In his pre sentencing remarks the judge, Mr Justice Lyell, said 'This is as bad a case as I have ever known. This was not just one sudden blow, this was a long drawn out brutal attack'. He then imposed a sentence of twelve years imprisonment.
Posted by Steven Horton at 21:46 No comments: