Agnes - The Terror of the Neighbourhood

A woman who beat a drunk man to the ground evaded any charges when he died, due to the postmortem drawing inconclusive results.

On Saturday 31st October 1857 William Evans, a 67 year old gunmaker described in the Northern Daily Times as a 'habitual drunkard', was confronted near his lodgings in Crosshall Street by Agnes Gallagher. She demanded he buy her drink or give her 3d. Evans refused and Gallagher knocked him down before continuing to punch him as he lay on the ground.

For the following two days Evans felt unwell and didn't get out of bed, but on the Tuesday he managed to whisky. His health continued to deteriorate and he died at 4pm on Wednesday 4th November.

The surgeon who carried out the postmortem determined that death was as a result of inflammation of the lungs, but could not say if this down to violence. This led to an open verdict being returned at the inquest, at which the Coroner censured Gallagher for her conduct. The beadle of the court described her as 'the terror of the neighbourhood.'

Posted by Steven Horton at 20:49 No comments:

Email ThisBlogThis!Share to TwitterShare to FacebookShare to Pinterest
Labels: 1857, battered

A Garston father who killed his toddler son whilst drunk was so overcome with grief that he died just two months after being sentenced to seven years in gaol. 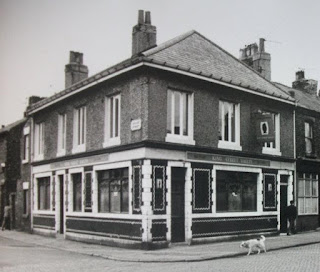 On Monday 26th August 1912 James Gibbons, a 39 year old shunter for the London & North Western Railway Company went out drinking at the King Street Vaults with some fellow employees. After two hours, he returned to the home in Saunby Street where he lived with his wife and three children. He had some supper and went to bed, lying alongside the youngest John, who was two and a half.

Around 11pm Mrs Gibbons heard crying and went upstairs to investigate. She saw her husband asleep but was horrified to see John's throat had been cut. She ran into the street to raise the alarm and withing minutes two police officers were on the scene. Closer examination showed that the head had almost been severed and the poor child was beyond help. A razor blade was next to the bed.

James was woken and on seeing the body, told the officers that he would go quietly. Ashe was being taken to the Bridewell he said "This is what drink does for you. My mind is a blank".

An inquest heard how James was "worn and dejected" and had his head bowed during the proceedings. His wife's brother told that although James was prone to drink, he was attached to the children, especially John. The barman from the King Street Vaults said he had drank four pints, but was in a sober position when he departed and "remained quite capable of being served". However two neighbours described how James staggered into the street laughing and couldn't find his door key. They did acknowledge that he loved his children and often played with them.

Although the inquest returned a verdict of manslaughter, the Stipendiary Magistrate committed James for trial at the assizes on a charge of murder. On 7th November, the jury found James guilty of the lesser charge, with a strong recommendation for mercy. This was on the basis that he was so drunk that he was irresponsible for his actions. After being sentenced to seven years penal servitude, James collapsed and had to be carried to the cells.

The health of James continued to deteriorate in Walton gaol and just two months after he was sentenced, he died on 18th January 1913. The site of Saunby Street is now occupied by Saunby Close.
Posted by Steven Horton at 22:40 No comments:

A captain and First Mate who mistreated a crew member were found guilty of his manslaughter in their trial at St Georges Hall.

On 1st September 1892 the Watchman left New York bound for various ports in Brazil. It had a crew of ten and was on a voyage scheduled to last several months. Amongst the crew was George Orr, who became a target or the brutality of the First Mate Patrick Fitzgerland. Orr and another sailor named Judson were regularly beaten with rope ends and belaying pins for little or no reason. On one occasion the Captain, William Crawford, ordered Fitzgerald to stop but he refused to do so, saying he would 'swing for it' one day.

Crawford got directly involved in the cruel behaviour and on 10th December he handcuffed Orr to the mizzen mast with hands above his head for several hours. After being briefly released, he was tied up again overnight wearing light clothing, his pants being allowed to fall down. Judson heard Orr being beaten and on waking up at 7am, he saw the poor man in a bunk breathing heavily and covered in scratches and black and blue bruises. He died a few moments later.

When the vessel reached Rio Grande a special naval court was commissioned, which ordered Crawford and Fitzgerald to be sent to England for a manslaughter trial. They arrived in Liverpool on 10th May 1893 aboard the Dryden and were immediately remanded in custody.

A the assizes trial in August, evidence was first heard from a seaman named Judson. Under cross examination Judson he that he and Orr had left the ship for two days at Rio Grande, due to their being no grog on board. However he denied that Orr was in any way  a loafer and said he was afraid to tell the captain about the extent of Fitzgerald's brutality. A German seaman called Karl Vogt said that Orr was beaten every day for two months, and that he never saw him refuse orders. He did accept though that Orr was weak and had not realised there was an underlying heart problem.

Another crew member, Harry Gamble, testified to seeing Orr tell Fitzgerald he was too weak to work after being released from irons, leading to a further beating. Under cross examination, Gamble admitted that Orr had told him back in New York that he had a weak heart. Gamble stated that he had been one of two seamen that had carried Orr to a bunk and washed him down. He also said that no other crew members apart from the captain and mate had beaten him.

The deposition that had been made in Rio by Crawford was then read out. This said that Orr was put in irons for stowing away and refusing orders, and that he believed the cause of death to be solely as a result of heat disease. Fitzgerald's deposition said that he had never hit Orr, only shaken him and that he disobeyed orders.

A surgeon believed the cause of death to be exposure, which would have been accelerated by heart problems. The ships log recorded cause of death as heart disease.

In their closing submissions, defence counsel said that Orr had refused orders, other crew members would not allow him to work with them due to his personal hygiene, and that nobody was liable for his death. In summing up, Judge Hopwood said that a captain has powers but must use them in moderation. He told the jury to determine if his powers were used in the reasonable cause of preventing a mutiny.

After deliberating for twenty minutes, the jury found both crew members guilty with a recommendation for mercy. Defence counsel pointed out they had already been in gaol on remand for six months. However in his sentencing remarks, Hopwood said that the matter was very serious as no mention of punishment was made at all in the log book. Both Crawford and Fitzgerald were sentenced to nine months imprisonment with hard labour.