When a cowkeeper died after being punched in the nose in a rent dispute, his attacker was guilty of manslaughter but not punished by the court. 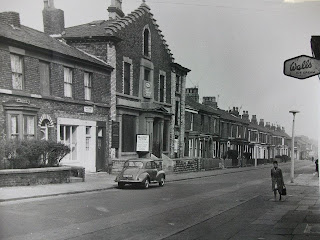 At 8pm on Monday 29th May 1893, Elizabeth Hughes went to Alfred Johnson's butchers shop in Thirlmere Road to collect rent for a coalyard that he rented from her. Johnson told her he had already given the money to her husband and knocked her to the floor.

Soon afterwards Elizabeth's husband David, a 54 year old cowkeeper, came to remonstrate with Johnson on his doorstep. As he did so, he was punched in the nose by Johnson's lodger George Derricot,  who was hiding behind the door. Dr Williams of Breckfield Road North was sent for and he managed to stop the bleeding then sent David home.

The following morning David took his milk cart out as usual, but when he stated bleeding whilst in London Road he went to seek treatment at the Royal Infirmary. He was attended to and sent home, but two days later on 1st June he felt worse and was admitted to the hospital. With his condition deteriorating, a deposition was taken from him on the 4th June in the presence of Derricot. David died the following evening, one week after the assault.

At the inquest Elizabeth's daughter Catherine Jones said she had gone to Johnson's premises with David on hearing that her mother had been knocked down. She then described how David undertook no provocation at all before being stabbed. Several residents of Thirlmere Road said that Elizabeth had been abusive to Johnson and he had simply pushed her away, while David had entered the shop and grabbed him by the throat. Johnson himself said that Derricot had not used any implement, and simply punched David to get him back out onto the street.

A insurance canvasser called Robert Heyes, who didn't know any of those involved, said that David did not put his hands on Johnson and he heard Derricot shout "Let me at him".  Dr Davies from the Royal Infirmary said that David had suffered a black eye and broken nose, and that death was  as a result of blood poisoning. Dr Davies also stated that David's kidneys were very diseased and this probably caused the continued bleeding. The jury returned a verdict of manslaughter against Derricot and he was committed for trial at the assizes.

On 28th July, Derricot's defence lawyer claimed that although technically manslaughter, the death was more accidental. The judge accepted this viewpoint and due to Derricot's previous good character he was discharged to "come up for judgement when called upon".
Posted by Steven Horton at 20:01 No comments: