A soldier who was arrested following the death of his wife whilst on leave was charged with her murder, but discharged at the assizes.

On the evening of Monday 7th June 1915 Mary Mullarkey was found lying on flags and groaning in the rear yard of a house in Hunter Street. Assumed to be drunk, she was helped to her room by two other occupants and left alone. 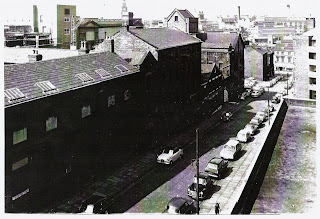 The following morning 34 year old Mary was found to be dead and police were called. There were signs of a struggle with broken crockery scattered around the floor and the rear window, from where there was a 22 foot drop, was open.

That afternoon Mary's husband Martin Mullarkey, also 34, was arrested at his barracks in Freshfield where he was serving with the 4th Battalion Kings Liverpool Regiment.

At the inquest, it was heard how the couple lived unhappily together and that drunken rows were frequent. Mary's own mother, also Mary, admitted that Martin had told her his wife had gone through the window, but she did not go and see her, instead buying her son in law some cigarettes. Detective Inspector Matthews said that it was impossible to say from the condition of the room whether Mary had fallen or been pushed. this led to an Open verdict being returned.

Despite the inquest verdict, magistrates still committed Martin for trial at the next Manchester assizes. This was on the basis of his statement to his mother in law, which didn't specify if she had jumped or he had pushed her. The soldier, who was still recuperating after being wounded in France, maintained he had never laid a finger on his wife that evening.

On 19th July, Martin appeared before Mr Justice Low. After the prosecution had made their opening comments, the judge intervened and said he did not think there is enough to justify a murder charge. The prosecuting counsel, Mr Swift, replied that he had pleasure with agreeing such a course. After directing the jury to return a not guilty verdict, Justice Low remarked that the coroner's jury had come to a sensible decision and ordered Martin's discharge.
Posted by Steven Horton at 20:13 No comments: