When the mother of Beatle John Lennon died after being knocked down on Menlove Avenue the inquest returned a verdict of death by misadventure, much to the disgust of his Aunt Mimi.

In his mid teenage years Lennon began building bridges with his mother Julia, having been brought up largely by her sister Mimi at 251 Menlove Avenue.  On the evening of 15th July 1958 Lennon was at Julia's home in Blomfield Road while Julia visited Mimi. At around 930pm she left to catch a bus but as she was crossing Menlove Avenue near its junction with Vale Road she was hit by a car and thrown 100 feet down the road.

Mimi raced to the scene but Julia was dead on arrival at Sefton general hospital and Lennon was so distraught her was unable to look at her body. She was buried at Allerton cemetery, after Lennon had cried throughout the funeral service with his head on Mimi's lap. 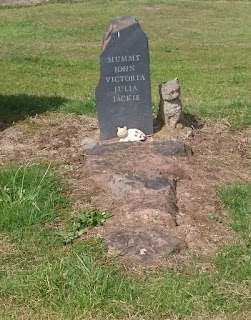 The Standard Vanguard car which had hit Julia was drive by Eric Clague, an off duty police officer who did not have a full driving licence. A post mortem determined that Julia had brain injuries caused by skull fractures, but at the inquest witnesses said she had stepped into the road without looking. Clague himself insisted he was driving at less than thirty miles an hour and this led to the misadventure verdict, causing Mimi to scream 'murderer' at him. Clague lived at 43 Ramilies Road, ironically off Penny Lane which was made so famous by The Beatles in a song ten years later.

Clague managed to avoid any publicity for forty years as he was not named in any newspaper reports in relation to the accident. It was only when a Daily Mirror journalist searched the archives at Liverpool Coroner's Court in 1998 that his identity was established. This led to him having to tell his own family of the role he played in Beatles history, but he told the reported concerned 'There was really nothing I could have done, Mrs Lennon just ran straight in front of me, I just couldn't avoid her. I was not speeding, I swear it. It was just one of those terrible things that happen.'