In 1888 a man was caught up in a neighbour dispute died from his injuries after he was struck by a brick. 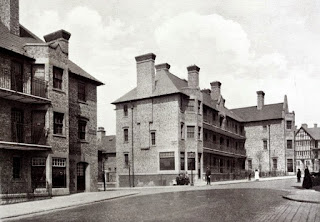 On 22nd July that year George Proctor, a forty year old labourer, spent the afternoon drinking with his wife at the home of a Mrs Douglas in a court off Bevington Street, Vauxhall. Whilst there Douglas had a quarrel with Mary Winston, a 23 year old fish hawker who lived on the opposite side of the court.

At 10.30pm George and his wife were leaving when he was struck by a brick, thrown from Winston's window. George fell down while Winston, who was married with three young children, danced and sang "I have not missed my aim".

George was carried back into the house and remained unconscious until the next morning. He went to the Northern Hospital where his wound was dressed and remained there three days before returning home to Gordon Street.

At the beginning of August, George was still complaining of pains of his head and was admitted to Mill Road hospital. As his condition deteriorated he gave a deposition stating he had seen Winston throw the brick. He died on Sunday 5th August and was buried in Everton Cemetery. At an inquest, the doctor who had treated him prior to death said it was as a direct result of the injury. A verdict of manslaughter was returned and Wilson was committed for trial.

At the assizes court on 20th December the defence argued that Winston's windows had been broken earlier in the day by Douglas. It was also suggested that he may have been hit by a brick being thrown by one of his own friends aimed at Winston. This failed to convince the jury however and she was found guilty of manslaughter.

In light of Whinston having already served two months in gaol on remand, she was sentenced to a further two months imprisonment with hard labour. On her release, she returned to Bevington Street where she and her husband, a dock labourer, remained together and had eight more children.