When a woman threw paraffin oil over her husband after he hit her, it caught fire leading to him dying from his injuries. The woman was found guilty of manslaughter but given leniency by the judge.

Soon after 10pm on the night of Saturday 13th March 1869 residents of Lonsdale Street in Edge Hill were shocked to see a man who had caught fire running down their street screaming. The man was Michael Crawley, a jobbing builder who lived in the street with his wife Mary Ann. The couple had had a row in which Mary Ann poured oil over her husband, which then caught light as he was near the fire.

When Michael stumbled and fell in Crown Street, a provision dealer named James Corless used his coat to extinguish the flames. Police Constable Wells took Michael to the Royal Infirmary in a car then returned to the street to apprehend Mary Ann, who was in her house. On arresting her for throwing oil at her husband she said that he had first struck her with his fist. A detective inspector attended the property and noticed that there were splashes of paraffin oil all over the kitchen.

Michael's face was charred and he had burns the length of both arms and most of his back. Mary Ann was charged with grievous bodily harm and remanded by magistrates, who recommended that a deposition be taken from Michael in case his condition worsened. He developed lockjaw and died on Sunday 21st March, with an inquest before the coroner returning a verdict of manslaughter.

On the 23rd March Mary Ann was brought before the Stipendiary Magistrate, Mr Raffles. She was described by the Liverpool Mercury as in delicate health and was allowed to sit on a chair for the duration of the proceedings. One of the Crawley's neighbours, Elizabeth Hughes, stated that Mary Ann had said to her 'Let him be burnt, to the devil with him.' Constable Wells said that Mary Ann had told him she was not sorry for throwing the oil but Mary Ann herself interrupted and denied this, pointing to the lump on her head which had resulted from being punched. 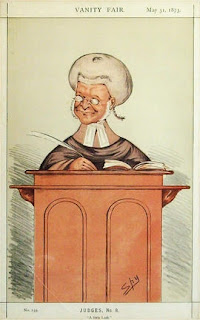 Prior to being committed to the assizes for trial Mary Ann was asked by Mr Raffles if she had anything to say and replied 'I am very sorry but I never threw the oil to burn him.' She appeared before Justice Lush just eight says later, where she was found guilty of manslaughter with a strong recommendation for mercy. The judge, having accepted Mary Ann's remorse and the fact the incident took place in a moment of excitement, sentenced her to just one day in prison.
Posted by Steven Horton at 18:08