There was a terrible scene at Princes Dock in 1841 when a ship's crew member was stabbed to death by a passenger who was later declared to be insane.

On 1st June that year the United States arrived at Princes Dock after a voyage from New Orleans that had lasted six weeks. As passengers prepared to disembark Patrick Cahill, who had been in steerage class, began to argue with a steward named Eli Robinson over some tobacco. Second Mate Robert Deakin observed Cahill threaten to kill Robinson and then chase him to the starboard side of the ship. Once there, Cahill struck him in the neck and then plunged a knife into the abdomen two or three times. 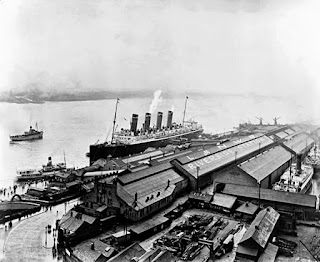 Deakin managed to use a rope to tie Cahill to a mast and he then turned his attentions to Robinson, who was bleeding heavily. Fifty five year old Robinson was rushed to the Northern Hospital where he was dead on arrival. Assistant house surgeon Edward Parker carried out a postmortem and found five wounds in all, one of which had pierced the heart.

At the inquest the following day Deakin described how Cahill had been a quiet and sober passenger throughout the crossing. It was only when the ship reached Holyhead that his mood changed and he began pacing the deck all night. Other witnesses  said that they had seen Cahill use the knife and Dr Parker said the wound to the heart as the cause of death.

After a verdict of wilful murder was returned, the borough coroner made out a warrant for Cahill's trial at the next assizes and the twenty eight year old was taken to Kirkdale Gaol.

When Cahill appeared before Mr Justice Wightman on 25th August the first witness was a woman called Sarah Barrow. She had been stood on the dockside and said that she saw Cahill run after Robinson with a knife. One of the Liverpool pilots told how he boarded the United States as Cahill came out of a cabin carrying a knife and appeared sober at the time. Under cross examination, the second mate Deakin admitted that Cahill had talked of little men dancing on the bow the night before the ship reached Liverpool.

Cahill's defence counsel argued  that he had carried out the act under mental aberration and had no motive. The fact that there were so many present, it was argued, showed that Cahill was the slave of some supernatural agency as he had no hope of escape after carrying out the stabbing. Cahill's Irish father gave evidence as to his background, stating that his son had fractured his skull in 1838 at a fair and gone to America unexpectedly. He visited his son in gaol and been told that the devil was from Yorkshire, leading him to believe him of unsound mind.

The Governor of Kirkdale Gaol, Mr Amos, described Cahill as odd, singular and troublesome since he had been committed there. Without having to leave the box, the jury acquitted Cahill on the grounds of insanity and he was detained at Her Majesty's pleasure.