A mother who cut the throats of her two young children was found guilty but insane. 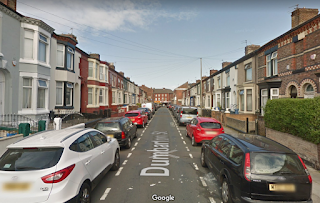 On 15th April 1933 the landlady of 34 Dumbarton Street, off County Road, heard moans coming from an upstairs room. On going in, he found 33 year old Lilian Wright lying on the bed with a throat wound. Next to her were the dead bodies of her children Audrey (4) and Lawrence (2).

The bodies of the children were removed from the property on stretchers, while Lilian had her wound bandaged and was taken to the Stanley Hospital in a semi conscious state. Lilian's husband William,  a haulage contractor, returned home to be greeted with the terrible news and collapsed into the arms of neighbours. The family had only moved to Dumbarton Street four days earlier, as Lilian had felt isolated at their previous home in Mossley Hill and wanted to be nearer friends she had known since childhood.

Later that evening William was taken to see his wife in hospital. She wrote him a note saying "Are Audrey and Lawrie dead? Please bury them in Church Road, near Dad. I would not leave them, I love them, bury me with them."

Lilian was transferred to Smithdown Road hospital and remained in a serious condition for five weeks. When she was finally discharged on 24th May, she as taken straight to the police court where she was charged with two murders and attempted suicide.

At the Assizes on 14th June, it was heard that William had been a kind and loving husband, but Lilian was convinced her eldest child would not survive and that she was being slowly poisoned. She was found guilty of murder but insane and ordered to be detained at His Majesty's Pleasure.