A Good Samaritan who intervened in a dispute over rent arrears died after being hit on the head by the landlord's wife.

In September 1855 John Woods evicted tenants from his cellar in Wellington Street, off Scotland Road due to them owing rent arrears of ten shillings and sixpence. On the tenth of that month, the tenants' son Thomas Nolan went to query the eviction with Mr Woods only to be punched to the ground and kicked. 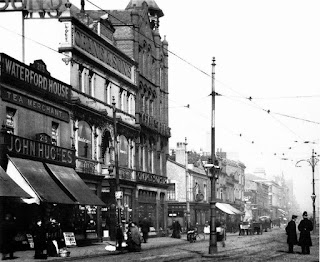 A neighbour, William Appleton, intervened to help Nolan, much to the anger of Woods' wife Margaret. She took a poker from her apron and hit Appleton over the head with it, then kicked him as he lay on the ground.

A crowd had gathered and some of them helped Appleton to his home. A doctor was summonsed from St Annes Dispensary, but the twenty year old died within an hour. Mr and Mrs Woods were taken into custody by the police.

At the inquest on 12th September, Nolan was described as 'a wooden legged cripple'. It heard that Appleton had intervened to ensure 'fair play.' Nolan gave evidence and said that he had been punched and kicked to the ground, but did not see what Appleton had been struck with. He also admitted that Appleton had thrown the first punch. The police officer who apprehended Mr and Mrs Woods said that Mrs Woods had said on being arrested 'I warmed the bastard once with a poker and will do so again if he comes here.'

The doctor who carried out the postmortem said that death was a result of extravasation of blood on the brain caused by external violence. Mrs Woods denied striking Appleton and said that he had been the aggressor. After the coroner summed up the jury returned a verdict of manslaughter and both man and wife were committed to the assizes for trial.

On 10th December at the South Lancashire Assizes Mr Woods was described as a shoemaker and Mrs Woods as a boot binder. Thirty-nine year old Mr Woods was acquitted but his wife, aged twenty-seven, was found guilty with a recommendation to mercy. She was sentenced by Justice Wightman to three months imprisonment.
Posted by Steven Horton at 20:50