A callous ex lodger who killed his former landlord and left another lodger for dead was brought to justice due to his alibi failing to stand up and a nervous twitch.

In the 1890s Edward Moyse ran a bookstall in Mann Island, which was near to his home in Redcross Street where he lived above a barbers shop with 15 year old John Needham, a boy who did chores for him. On the  night of 18-19th February 1895 Moyse was battered in his bed by his ex-lodger William Miller, who was looking for the elderly man's rumoured stash of money. After killing 53 year old Moyse, Miller, who had just returned from sea, turned his attentions to Needham, raining blows on him with a poker. 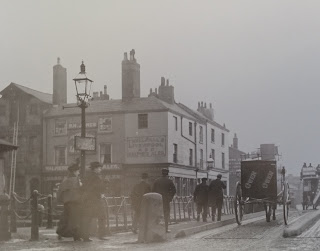 It was his failure to finish off the boy however that was to lead Miller to the gallows. Needham managed to crawl into the street to raise the alarm at about 6am when he was taken to the Northern Hospital. When police searched the house they found the only money there, £8, was under Moyse's pillow.


When Needham gave a description to the police, he was able to recall a nervous twitch that Miller possessed. A woman told police that a man who only ventured out at night and fitted his description lived in Edgeware Street in Edge Hill. Miller, who was staying there with his estranged wife's mother, was arrested and a  bloodstained shirt was found in his room. He tried to account for this by saying he worked in a slaughterhouse, but when he was taken there and pointed to the spot where he claimed to have killed the animals, the superintendent of the abattoir said none had been slaughtered there for months.

27 year old Miller was then taken to the bedside of John Needham, who had already eliminated various other suspects in identity parades. This time however Miller started to twitch and Needham was hysterical, leading to him being charged with the murder.

The trial began on 13th May and lasted three days. Needham, who by now had almost made a full recovery, gave his evidence in an impressive manner, leading to many offers of employment. Other witnesses told how they had seen Miller acting suspiciously in the vicinity and taking a keen interest in whether one or two people were dead. Miller, whose wife gave birth to a baby while he was in gaol, was found guilty and hanged on 4th June, continuing to protest his innocence.