A mother who suffered a bout of insanity in 1932 killed her baby daughter by gas poisoning. She was charged with murder but found guilty but insane.

At 10pm on 17th February that year flour mill worker John William Adams, returned to his home in Rectory Street, Toxteth, which was off Beresford Road where Stonegate Drive is now. The house was in darkness but he was not initially concerned, assuming his wife Eliza had taken their seven month old daughter to see relatives. 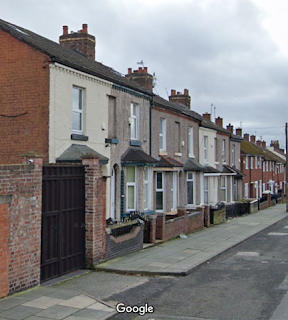 John waited but after midnight passed he was so worried he forced entry to the house. On doing so he saw his wife's outdoor coat over a chair and the baby's milk bottle on a table. He rushed upstairs and found them both unconscious on the bed. A doctor was called who certified that Dorothy was dead after unsuccessfully trying artificial respiration.

Eliza had begun to come around and was in a dazed condition, holding her head in her hands and moaning incoherently when police officers from the Essex Street bridewell arrived. A constable searching the bedroom smelt gas on the bedclothes and found a note that said "Dear Bill, please forgive me but this is the only way, Goodbye, Eliza." There was a gas tube in the room connected to a bracket, but no smell of gas in the room itself. Eliza was taken to Smithdown Road hospital for further observation.

It was nearly a week before 25 year old Eliza was able to be discharged. When interviewed by the police and when told that Dorothy was dead she replied "No, no is my baby dead?" On being charged with murder and attempted suicide she admitted that she had tried to kill herself with coal gas. When Eliza appeared in the police court the Liverpool Echo reported that she was "a pitiful figure who sat with her head bowed and frequently wept silently." She had to be supported by two officers and after being remanded into custody, John was allowed to see her briefly.

On 7th April Eliza appeared at the assizes. Smartly dressed in green, she was barely audible as she entered a not guilty plea. An aunt who lived next door testified that Eliza had always been a loving mother and that there was a history of insanity in the family. Dr W.A. Davies, assistant medical officer at the hospital said that her confused state on admission was not down to gas poisoning and commented "I believe that at the time she was not responsible for her actions and did not understand their nature." The medical superintendent, Dr Steele, confirmed he had certified her under the Lunacy Act.

After being found guilty but insane the judge ordered that Eliza be confined in  criminal lunatic asylum at His Majesty's pleasure. She had to be assisted to stand up, kept her hands over her eyes and was helped to the cells by two wardresses. Eliza was released from her institution by the end of the decade and was living with John at 5 Beresford Road.