A Tuebrook woman devastated by the death of her husband strangled her young daughter. When she stood trial for murder, she was found to be guilty but insane.

On the morning of 25th January 1937 Ethel Brown, a 25 year old widow living in 35 Witton Road, Tuebrook, had an argument with her mother, who then left the house. Around 10am Ethel ran to the home of Mrs Yeates in Adshead Road, hoping to find her mother but she wasn't there. Ethel sobbed "Help me, I have killed Maudie" and then collapsed. 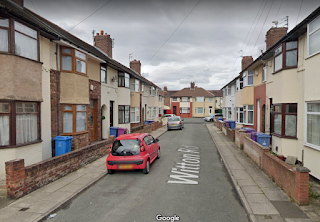 After Ethel came round, Mrs Yeates accompanied her to Witton Road, where Maud's body was lying on a bed in a back bedroom. She had been strangled with a tablecloth and Dr Cohen from Marlborough Road was called to confirm the death. Ethel was in a hysterical state by the time two detectives arrived to arrest her and arrange the removal of the body to a mortuary.

When she calmed down, Ethel made a full confession, telling the detectives "I did it, I did not mean to do it, I do not know what came over me." That afternoon she appeared at the police court and remanded into custody. Maud was buried at Anfield Cemetery. Her death had come just four months after that of her father, who died in September 1936.

Ethel was first due to be tried on 11th March, but she was ill with pneumonia and the judge allowed the case to be referred to the Manchester assizes the following month.

On 30th April 1937, Dr Shannon from Strangeways gaol gave evidence that she was insane at the time she committed the crime.  Ethel's mother said she was an affectionate woman who was passionately fond of her daughter, but this changed after she became widowed and she was often distressed. Ethel was then detained at His Majesty's pleasure.