Man Murders Wife Then Sleeps Next To Her Body

In 1910 dock fireman Henry Thompson killed his wife and slept with the corpse for two nights before his horrific crime was discovered. 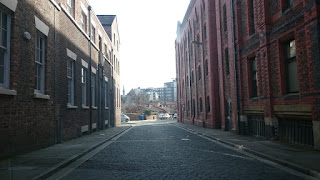 54 year old Thompson lived in York Street, which runs off Duke Street in Liverpool city centre, along with his 47 year old wife Mary and their lodgers Mr and Mrs Reynolds. On the night of 30th July Thompson was drinking in the house with Mr Reynolds and Mary's brother, but Mary herself was not present. At around 11.30pm Mary's brother left and Thompson was heard to shout to Mary who was in the street words to the affect of 'You can stay where you've been all night, I'll kill you if you come in. I've been nearly hung for somebody and I'll be hung for you.'

In the early hours Mary crept into the Reynolds' room and asked them to shield her from her husband. When Thompson went into the room himself, Mary was hidden behind the bed and he was told she was not there. Not believing them, Thompson walked to the bed and found Mary, dragged her out the room and threatened to throw Mrs Reynolds out of the window if she intervened.

Mrs Reynolds would later give evidence saying that she did not see Mary alive after then and had heard a female voice scream 'Harry don't choke me' and something heavy being dragged along the floor. For the whole of Sunday 31st July Thompson gave the impression that all was well with Mary, refusing Mrs Reynolds's offer to make her some tea but instead sending her out for some whisky, saying it was Mary's birthday. In the evening, Thompson gave Mrs Reynolds some meat and asked her to cook it for Mary, but refused to let her see his wife, using force to prevent her going up the stairs. When Mr Reynolds went to bed that night he went into Thompson's room as he was not in the house, but there was no light and he saw nothing untoward.

The following morning, Mrs Reynolds had grown so suspicious of Thompson's behaviour that she went in the room while he was in a deep sleep and found Mary's body next to him, stone cold and dressed in the same clothing as she had been wearing on the Saturday night. Police were called and Thompson taken to the local Bridewell.

Thompson acted erratically while in the Bridewell, saying first he knew nothing about it, then that he may have struck her accidentally and that Mary was a good woman when she didn't drink. A post mortem showed that Mary had been strangled and in his trial Thompson said that Mary had been alive on the Sunday night when they both went to bed, but he was awoken by police in the morning and she was dead. The jury found him guilty and Thompson told the judge to 'sentence away' and that he was not afraid of death.

Thompson was hanged on 21st November, two days before a much more notorious wife killer, Dr Crippen, was hanged at Pentonville in London. Thompson acted with complete nonchalance in the days before his death, joking with warders that he would be senior to Crippen on the other side. John Ellis, the hangman wrote that Thompson went to his death with an 'air of utter unconcern' and that he had 'never hanged a cooler man' in his life.