Killed by a Ginger Beer Bottle

In what was described by the press as "a sordid story" and "low life tragedy", a man in Bootle was killed when his partner hit him over the head with a ginger beer bottle. She was charged with murder, but found guilty of manslaughter and jailed for ten years. 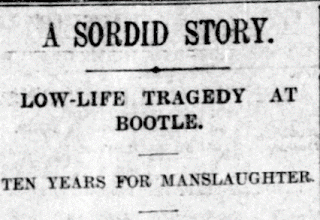 At the beginning of August 1912 dock labourer Arthur Mallin and Mary Ellen Mason took up lodgings in Aber Street, which used to be off Irlam Road. On the 10th of the month, the couple went out drinking in the afternoon, returning at teatime quite intoxicated but on good terms. When Arthur said he didn't want to go out again, Mary hit him with a ginger beer bottle. Although he had a cut to the head, Arthur remained calm and simply went out to avoid any further confrontation.

A few hours later Mary asked the landlady to go out with her to look for Arthur. They found him in a hotel, where he was stood at the bar cutting tobacco. Mary told him to come outside and he did, only to be dealt a blow to the face. Arthur reminded Mary that he had a knife in his hand, but she grabbed it from him along with a cap he had been wearing to hide his cut head.

When Arthur asked for his cap back Mary gave it to him, then stabbed him in the chest with the knife. Arthur staggered into an adjoining street and fell down. When a passing woman asked why Mary had stabbed him she replied "mind your own business". She then took two shillings and a watch from Arthur's pockets and kicked him, telling others looking on that he had had a fit and was shamming.

The police were quickly on the scene to arrest Mary, while a horse ambulance was summonsed to take Arthur to hospital, where he was pronounced dead on arrival. A postmortem revealed wounds to the head and also two and a half inch deep puncture wound in the chest. Death was caused by hemorrhage from the wound.

Mary was charged with murder appeared before Lord Coleridge on 6th November that year. Medical evidence was heard that it was very unlikely that Arthur could have fallen against the knife, and also that the head wounds were caused by blows of considerable force. The jury found her guilty of the lesser charge of manslaughter but she was told by the judge that her actions were a little less than murder. He then sentenced Mary to ten years imprisonment.