A taxi driver that knocked down a pedestrian whilst under the influence of alcohol was convicted of manslaughter when the victim died of her injuries. 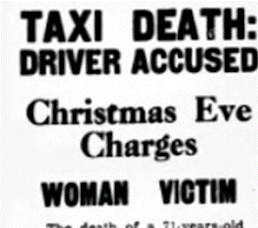 On Christmas Eve 1952 Martha Bretherton, did some last minute shopping but was knocked down as she crossed West Derby Road heading for her home in Schomberg Street. The vehicle that struck her was a taxi cab with two passengers inside and was being driven by 61 year old William Herbert Watts, who immediately pulled over.

The police were sent for and Watts was taken into custody, where a doctor deemed him as unfit to have proper control over a vehicle. By the time he was fit to be interviewed, he had little recollection of what had happened. The passengers, one of whom had arrived at Lime Street on a train from London, said that earlier in the journey he had mounted a pavement and nearly collided with oncoming traffic whilst overtaking a tramcar.

Martha, who was 71, remained in hospital for five weeks with fractures to her leg, arm, jaw and a haemorrhage. She passed away as a result of her injuries on 30th January 1953. Watts, who had already been remanded on bail charged with drink driving and dangerous driving was rearrested and placed before the magistrates court charged with manslaughter. He was remanded on bail again, but this time with a surety of £20.

At the Liverpool Assizes on 2nd April, Watts pleaded not guilty to the charge. Rose Heilbron Q.C. prosecuting told the court that on getting out of the taxi Watts was unsteady on his feet and smelt of drink. In his own evidence, Watts claimed that Martha had dashed from the pavement in front of his taxi and he could do nothing to avoid her. However he was fond guilty of manslaughter, with the charges of drink driving and dangerous driving remaining on file.

As he was sentenced to eighteen months imprisonment and disqualified from driving for fifteen years, Watts was told by Mr Justice Cassells "You drove your taxicab when You were not fit to drive, and unfit to keep up with the ordinary happenings on the road. It is a pity that you, with your long experience of driving, should have indulged as you must have done in order to get into that state. By your conduct an elderly woman has had her life brought to an end. The court cannot, pass lightly over such conduct."