A cab driver died when he was poked in the eye following an argument over a fare, but the three year jail sentence for his attacker was reduced on appeal.

On the evening of 12th May 1913 cab driver Sydney Macdonald was waiting for a fare by the Adelphi Hotel when he got into a verbal argument with Thomas Sykes, a 45 year old office clerk. Witnesses differed with their versions of what happened, but it was agreed that Macdonald ended up with a laceration in his eye caused by Sykes' umbrella. 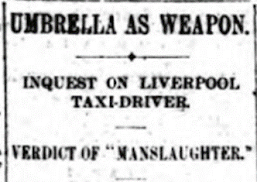 Macdonald, who was aged 28 and lived at 4 Dorset Avenue in Tuebrook, was taken to the Royal Infirmary for treatment on the cut. His vision was unaffected but the following day he began to suffer from delirium tremens and two days later he was uncontrollable. In the early hours of the 16th he suffered convulsions and died. A postmortem concluded that death was as a result of delirium tremens, provoked by the eye wound.

An inquest took place on 26th May, where Macdonald's widow described him as "moderate in his habits" and that he had "never been worse for drink." Another cab driver  thought that Sykes had poked McDonald in the eye with the umbrella after he refused to take a fare for two young women. However a bystander believed Sykes was calling McDonald "Flash Alex" and struck him. Under cross examination, two surgeons accepted that drink played a part in the delirium tremens, but that death was accelerated by the wound. After returning a verdict of manslaughter, Sykes was committed for trial.

Sykes faced trial on Friday the 13th June and unusually for the time, gave evidence himself. He claimed that the women were in need of help and that others had pushed him to the front to get Macdonald to take the fare. He accepted that although he had the umbrella under his arm, he had no idea that it had injured Macdonald.

The jury considered what Sykes had to say but also took on board the medical evidence, leading to them returning a verdict of guilty. On being sentenced to three years imprisonment, Sykes fainted in the dock. The following month, Sykes' sentence was examined by the Court of Criminal Appeal who ruled it too severe and it was reduced to just twelve months.