Not Guilty Due to a Plaster

A man whose friend died after they had a fight was cleared of the killing when it became apparent his wound had not been treated properly.

On Saturday 6th November 1909 two friends, James McCabe and Charles Leeson, began arguing whilst drunk at the Pacific Hotel in Linacre Road, Bootle. When pushed by McCabe, Leeson responded by hitting him on the head with a pint glass that he was holding. 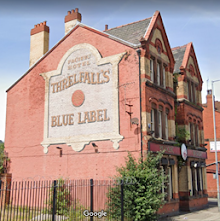 McCabe suffered a cut above his left eye but was still able to seek medical attention from a doctor who dressed it. The following morning he got up to go to work as normal at the local gas works, taking off the bandage and having his wife stick a plaster over the cut.

After less than an hour at work, McCabe left as he felt unwell. He went to bed and remained there for 24 hours, passing away on the Monday after erysipelas had set in. On being arrested Leeson admitted holding a glass but insisted it was the back of his hand that struck his friend.

At the trial on 30th November Dr Mayor, who had dressed the wound on the night of it occurring, gave evidence. He stated that the bandage should never have been removed and replacing it with a plaster meant that discharge was prevented from escaping.

Leeson himself took the stand, saying they had been friends for over 25 years and never had a falling out until that night, on which McCabe struck the first blow. Leeson was fond not guilty and discharged,

Email ThisBlogThis!Share to TwitterShare to FacebookShare to Pinterest
Labels: 1909, Bootle