Baby's Body in a Suitcase

In the 1920s a woman carried the body of her stillborn child in a suitcase for seven years before her secret was discovered. When the case came to court she was not given any sentence, with the judge saying she had suffered enough. 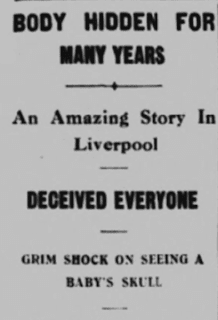 In December 1930 Nora Pulson and her husband William returned to Liverpool for the birth of what friends and family others assumed was their first child. The couple had left in the summer of 1926 to be married in Kent and then settled in Coventry.

After giving birth in a nursing home, 33 year old Nora stayed with a lifelong friend Constance Hockenhull in Manston Road, Kensington for a number of weeks.

On 29th January 1931 Constance began tidying up the room where Nora stayed and opened a suitcase to put some clothes. Wrapped in some cloth was what she initially thought was a turnip but was instead a baby's skull. A horrified Constance ran out of her house in shock and by the time she was ready to return, found the case had gone. A note had been left by Nora saying she would be in touch in a few days.

When Constance did not hear anything for ten days she contacted her father, who immediately bought in the police. Detectives visited Nora at her lodgings at 70 Needham Road and she told them that the suitcase was under the bed upstairs. Initially Nora said she had given birth to a stillborn child in 1926 whilst living in Coventry with William, who confirmed this.

Further enquiries in Coventry established that Nora gave birth to a child in October 1926, who lived for twelve days. The death was registered and a burial took place.  Confronted with his information, Nora admitted having given birth to the stillborn child in 1924 whilst living with her sister and father in Garmoyle Road Wavertree, then put it in a trunk and took it with her when she left home two years later. At that time, she explained, she was engaged but they could not afford to marry as William was unemployed. 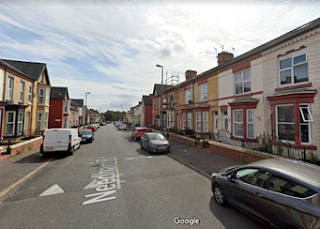 When asked what he knew about the birth out of wedlock, William confirmed that the child was his and that he had been told by Nora she had a stillbirth. He said he had never seen the body and maintained he had no idea that she had been carrying it in a suitcase for so long and that 'no intelligent man would connive at such madness.' Asked why he lied over the birth in Coventry, he said it was to protect his wife's good name.

At an inquest, Nora's father said that that he had never met her husband until his daughter returned to Liverpool a few months earlier. He had not known about the baby who died in Coventry and she had managed to hide her pregnancy in 1924. A pathologist said that it was impossible to say whether the baby had been born alive. Nora and her husband both swore on oath that the second statements they had made to the police were true and apologised for the upset caused to friends and family.

An open verdict was returned, but the Coroner advised Nora she still could face action in the criminal courts. Nora was charged with concealment of birth and committed to the assizes for trial. On 13th April she pleaded guilty. In mitigation, her defence counsel Basil Nield told the court that Nora's father had been in an eminently respectable position, was of strict principles and that she had been terrified he would find out about the pregnancy.

In ordering that Nora be bound over for twelve months, Mr Justice Wright told her "Your case is a very unusual one. There is no reason to think that the child had a separate existence and although you acted very foolishly and wrongly I think the fact you have been brought before the court is sufficient imprisonment.". Nora died in North Wales in 1953.