Killed Over a Cigarette

A man in a hostel was killed after he had denied a cigarette to another resident.
At around 3am on Saturday 28th September 1957 Joseph Flynn, a frail 78 year old, was asleep in his dormitory bed at the Westminster House hostel in Kirkdale. This was a local authority run home situated in the former Kirkdale Industrial School building. He was woken by Patrick Hyland, who slept in the next bed, rummaging through his belongings. 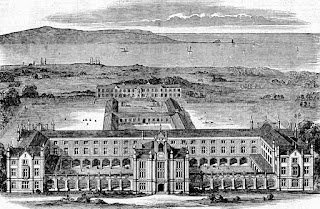 When Flynn remonstrated with 66 year old Hyland, he was met with a series of blows about the head. Hyland then went to the hostel office and said that a man was injured in the dormitory. Staff then  found Flynn to be conscious and even though he had blood coming from his nostrils, he refused medical attention.

Six hours later Flynn's condition was found to have deteriorated and he died at 930am. Detectives from Westminster Road police station attended and told Hyland that he would be detained on suspicion of causing the death. He responded that he had slapped Flynn, but only after being called a B*STARD.

A postmortem found that Flynn had a broken jaw and had died of cerebral haemorrhage due to multiple blows causing bruising to the brain. On being told of the postmortem results that evening. Hyland replied 'It was just a bout of fisticuffs'. After being charged with manslaughter, Hyland was remanded in custody at the Magistrates Court on the Monday morning.

On 11th February 1958 Hyland admitted manslaughter, saying that he had been drinking ale, stout and surgical spirit and was looking for a cigarette. His defense counsel said 'If ever the expression demon drink had a meaning it was this case. For the rest of his life he will carry the burden of having killed a fellow creature for the price of a cigarette'. Hyland, described by the Liverpool Echo as a chronic drunkard, was jailed for fifteen months.
Posted by Steven Horton at 22:51