The only British Prime Minister ever to be assassinated was Spencer Perceval, who was gunned down by Liverpool man John Bellingham on 11th May 1812.

Bellingham lived in Duke Street and was a businessman involved in exporting timber to Russia but he lost everything when a buyer went bankrupt. Unable to pay off his debts, Bellingham found himself in prison. On release, he went to Russia to complain about the situation and was imprisoned there too. Despite writing to the British ambassador pleading for release, red tape ensured he stayed there for months. When he finally came home, he sought compensation by writing to his MP and the Prince Regent, but nothing came of this. 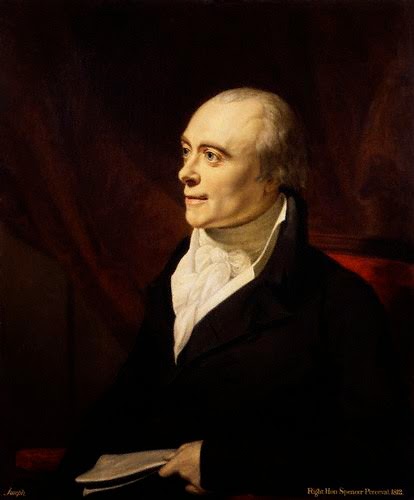 Bellingham decided to act by shooting the Prime Minister, making several visits to the House of Commons to plot his crime. He bought two pistols from a shop in London and on 11th May he shot Perceval dead as he entered the Commons lobby in full view of several witnesses. Bellingham was recognised by Liverpool MPs Banastre Tarleton and Bamber Gascoyne and immediately restrained and disarmed.

Bellingham was taken to Newgate prison where he retained a cheery persona. He was tried just four days later, his pleas that he needed more time to prepare a defence being dismissed. He made along statement pleading his grievances but the jury took only 15 minutes to find him guilty. The judge sentenced him to death, decreeing that he had known what he was doing and was not insane. Three days after this, he was hanged in public and his body taken away for dissection at St Bartholomews Hospital. Perceval was buried in a family vault at St Luke's Church in Charlton, South East London.