A father who was driven by poverty to kill youngest son in 1909 was detained as a criminal lunatic.

William McCormick was a marine fireman but an injury sustained to his leg in 1907 meant he struggled to find work. On 26th January 1909 he returned to his Burlington Street home after another frustrating day in which the doctor at the port had refused to pass him fit. After an argument with his mother in law he instructed his five year old son to go upstairs and then carried his 19 month old after him. 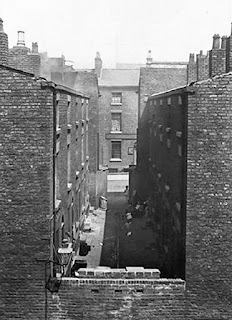 Shortly afterwards the five year old run downstairs with his throat cut, leading to the alarm being raised by McCormick's mother in law. When the police arrived he was sat at the kitchen table with a razor blade, and calmly said that he didn't want his children to have such a terrible life as he had had and they would be better off dead. The baby was found lifeless upstairs and McCormick was arrested and charged with murder.

At his trial on 11th March McCormick's counsel provided evidence that he had suffered depression and fits of explosive insanity brought on by melancholia, as well as attempting suicide. However Walton gaol's doctor testified that he had appeared perfectly sane whilst awaiting trial, and although feeling morbid could well have planned the crime.

On deliberation by the jury McCormick was found guilty but insane and detained indefinitely.