The Poisoning of Margaret Burns

In the early 19th century Charles Angus stood trial for the murder of his sister in law but was found not guilty. Despite this, he found widespread animosity against him and returned to his native Scotland.

Born in Stranraer, Angus came to Liverpool where he quickly prospered in the mercantile insurance business. He married 13 year old Maria McQuistin, for whom he had been acting as a guardian on behalf of her plantation owner father. They had 3 children before Maria died of consumption aged 21 in 1805.

Angus then had a strong of affairs and claimed that he was able to perform abortions if need be. One of those affairs was with Maria's half sister, Margaret Burns and in March 1808 she was found dead by a servant but no doctor was informed for three days. A neighbour eventually alerted medics and a post mortem showed a hole burned in her stomach. Angus was charged with murder by administering corrosive poison. 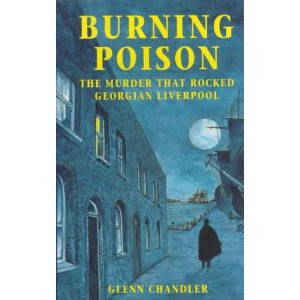 At the trial in Lancaster, Angus claimed that it was the malice of other women that had led to his arrest, calling upon witnesses who said that Maria was a sickly woman was acquitted when surgeons admitted that the poison could have been administered accidentally. Afterwards however, most remained convinced he was guilty of the crime, having got off on a pure technicality. Angus went to Ayrshire where he died in 1820, still protesting his innocence. In 2000 a book by Glenn Chandler was published about the case.

Email ThisBlogThis!Share to TwitterShare to FacebookShare to Pinterest
Labels: 1808, not guilty, poisoned