When a Liverpool teamowner was killed by one of his employees after a row, the jury took a lenient view and found him guilty only of manslaughter.

On 25th March 1889 George Godfrey, was in the fruit rooms at Victoria Street with one of his employees, a porter named  Samuel Vaughan. After some words were exchanged between the two over an outstanding delivery to a Blackburn trader, Godfrey punched Vaughan, causing him to fall to the ground. 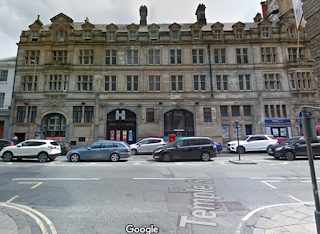 An hour later, Vaughan confronted 25 year old Godfrey in his office which was upstairs in the same building, demanding a shilling. The request was refused and as Godfrey was leaving via some stairs, Vaughan hit him from behind with an adze (a cutting tool). Godfrey was taken to the Northern Hospital.

Vaughan was apprehended later that evening at a public house in Conway Street. As he was being conveyed to the Bridewell he said to the police officer "I struck him with the flat end, not the sharp end". Four days later Godfrey died from inflammation of the brain having never fully regain consciousness. He was just twenty five years old.

The funeral of Godfrey took place on 2nd April and was attended by a number of master carters and fruit merchants. There were nine mourning coaches and 3,000 lining the streets around his home in Rose Vale, Everton. Around 400 mourners were at Anfield Cemetery, where he was buried in the Roman Catholic section. It was the second tragedy within a year for his widow, the couple had lost their baby daughter the previous May.

The day after the funeral Vaughan, who had initially been charged with wounding, was brought before the Police Court and committed to the assizes to stand trial for murder. A crucial factor behind this decision was that he had an hour to calm down after being struck by Godfrey and that he had told another porter he would "knock his brains out" and intended to "do for him". 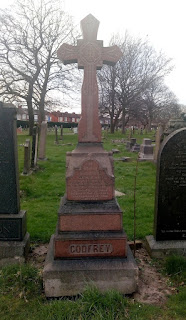 On 23rd May Vaughan stood trial and unusually for the time, gave his own statement. He claimed that  Godfrey had again hit him in the office and that he found the adze used was on a table there. Prosecutors acknowledged that an adze was not usually carried by porters. In the closing statement, Vaughan's defence counsel described him as "an uneducated passionate man who was smarting under the blow which he had received". It was also pointed out that although nobody had seen or heard Godfrey strike Vaughan at the top of the stairs, it was the same case in relation to the blow with the adze.

After deliberating for ten minutes the jury returned a verdict of manslaughter. However Mr Justice Stephens was in no mood for leniency. He told Vaughan that due to his use of an implement and having gone to the office intending to cause harm, a murder verdict would have been justifiable. Saying it was for the protection of the public, he then imposed a sentence of fifteen years penal servitude.