A shocking case of cruelty on a vessel sailing from Barbados to Liverpool led to the captain of the ship being hanged in public at Kirkdale.

The Martha and Jane was a Sunderland registered vessel that sailed from Hartlepool to Calcutta in 1856, then on to Demerara and Barbados, where she underwent repair and a change of crew. On 29th April 1857 an able seaman named Andrew Rose joined the crew but ran away after being beaten by the second mate, Charles Seymour, who found fault with his work. Rose remained at large for a few days but was captured by police and returned to the ship and put in irons. 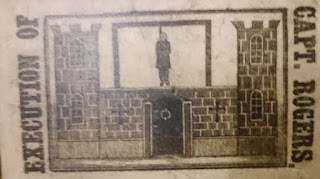 On 11th May the ship sailed for Liverpool and Rose was briefly freed, but he was suffering from diarrhoea and frequently beaten with a rope and whip by Seymour, Rogers and the chief mate William Miles for dirtying the decks. One Sunday morning, Rose was on deck singing a hymn and Rogers forced an iron bolt into his mouth, then Seymour and Miles secured it with a rope tied behind his head, leaving Rose like that for an hour and a half.

As the days went on the sadism increased with Rogers whipping Rose then setting a dog on him to bite the wounds, which covered his whole body as his clothes had been thrown overboard due to being soiled. Most of the time he remained in chains but on one occasion asked to go to the bows to relieve himself, a request which was refused. After doing what he had to do on deck, Rose was beaten by the two mates and then held down, while Rogers got a wooden stick and shoved the excrement up his nose and into his mouth shouting ‘isn’t it nice.’

A few days later Rose was put in a water cask by Rogers and rolled up and down the deck, then cast over the side of the ship for twelve hours. As the poor man begged for some food or drink, Rogers told him he wished he would drown or hang himself. When Rose replied that he wished Rogers would do it for him, the captain put a rope around his neck and hoisted him above deck, leaving him dangling for two minutes. As he was cut down his skin was black, his eyes were protruding and foam was protruding from the mouth. Rogers mocked that another half a minute and Rose would have been dead.

Two or three days later on the morning of 5th June, Rose crawled along the deck until he could move no more, then laid down and died. When fellow crew members found him an hour or two later his wounds were maggot infested and they were loathe to touch him. At the order of Rogers, his body was hauled by a rope along the deck and thrown overboard. On 9th June the ship arrived in Liverpool, where Rogers, Seymour and Miles were arrested, the three of them claiming that they had only been reported as the crew wanted 10 shillings a day for attending court.

The trial took place on 20th August, with witnesses telling the court that Rose had been beaten daily voyage, including twelve times on one day. They had never seen him neglect his duty or orders and he got on well with the rest of the crew. Even though his contract stipulated he would receive meat and tea, his daily meals consisted of just dry bread and water. Three doctors were called and stated that if the witnesses were truthful, then Rose’s death would have been directly caused or accelerated by his treatment. In defence, it was claimed that any sores on Rose’s body were as a result of sleeping in fields in Barbados, while the defence counsel tried to suggest that the Martha and Jane wasn’t a British ship, therefore it wasn’t subject to British laws. Rogers defence was that any punishment was to keep discipline and that it was illogical to disable an able seaman when the ship was already short on crew. Miles and Seymour’s defence was that they were simply following the captain’s orders.

The judge took two hours to sum up, pointing out that the three defendants were of enough intelligence to know that what they were doing could eventually have fatal consequences. After an hours deliberation the jury found all three guilty of murder and there were cheers from the public benches when a guilty verdict was returned, although there was a recommendation for mercy. Passing sentence, the judge described Rose’s treatment as barbarous and it was right that their lives should be ‘forfeited to the laws of this country.’ No emotion was shown by any of the men and as they were taken to the cells word reached those gathered outside what had happened, leading to more cheering.

There were hopes all three convicts may be reprieved but two days before the execution word came from the Home Office that although Seymour’s and Miles’s sentences would be commuted to life imprisonment, Rogers would still be hanged. The following day Rogers’s wife and three of his five children visited him in the condemned cell, where he visibly shook as he was bade goodbye. They were then taken in a cab to their hotel in Lord Nelson Street, while Seymour and Miles remained with Rogers at his request. He accepted his fate and was prepared for it, believing his prayers of repentance would be acknowledged by the Redeemer. He did not however, accept that his actions had been directly responsible for Rose’s death. His main concern was for his children and the stigma such a horrible fate as his would have on them. That Friday night prison philanthropist Mr Wright arrived to see another prisoner, having been under the impression all three were reprieved. On hearing he was mistaken, he agreed to stay overnight to comfort Rogers, who then slept far better than previously.

Crowds began to gather at 6am on 12th September, the morning of the execution and the Liverpool Mercury reported that a black man was seen on Walton Road asking for directions to the gaol. The paper said that the crowd was much more of ‘sober appearance’ than previous, with many passing the time before noon reading newspapers. On the periphery though, ‘shoeless and stockingless urchins’ spent their time rolling in mood and fighting each other with caps, presenting an ‘incongruous scene’. It meant the 200 police on duty were not totally unoccupied especially as noon drew near, the paper reporting that ‘a great portion of the scum of society were to be seen in large masses’ travelling up Walton and Vauxhall Roads in he direction of the gaol. There were also a number of seamen present of varying ranks, expressing little sympathy for Rogers and showing only regret that his two mates had been reprieved.

The 40,000 strong crowd was swelled by spectators arriving on trains from Rochdale and Manchester, and omnibuses from Liverpool were full to capacity. One 70 year old had come from Bolton and told a reporter it was such a terrible case that he would gladly have made the rope himself and he had seen his first hanging at Ipswich in 1804. Despite the early hour many were drunk, one man who was ‘in an advanced stage of intoxication’ staggered and fell into a gutter, while another fell asleep under a hedge and missed what he had gone there for.

Rogers refused a final breakfast, preferring to just have some milk. He remained in the prison chapel most of the morning and just after noon he was taken to the scaffold, accompanied by the prison chaplain and Mr Wright. As the rope was placed around his neck he said ‘Lord receive my spirit, Lord save me’ before the bolt was drawn. Calcraft had calculated everything perfectly and there were convulsions for just a few seconds.  Sailors in the crowd were heard to say ‘serves him right’ and as there was a surge towards the scaffold, one man had his arm broken and was taken to the Northern Hospital. After an hour Calcraft re-appeared and cut down the body, which was buried that evening in the gaol grounds. The clothes were given to Mr Allsop of the Crystal Palace waxworks in Lime Street, where  a model of Rogers was being put on display the following Tuesday.